AoS is set to boost its worldwide network and ministry to better assist crew working in current tough conditions faced by shipping.
"Looking at the maritime world that is quickly changing with the opening of new shipping routes and the merging of companies to maximise efficiency and profit, as AoS we are invited to be more united in doing our work, avoiding fragmentation and division,” said Cardinal Antonio Maria Vegliò, President of the Pontifical Council for the Pastoral Care of Migrants and Itinerant People, which coordinates the activities of AoS worldwide.
Cardinal Vegliò (pictured) was speaking at the opening of the Council’s AoS Regional Coordinators Meeting in the Rome today.  The five-day conference will focus on how AoS is to move forward as a global organisation in addressing issues related to seafarer welfare amid existing financial constraints within the industry.
He recalled the invitation expressed in the final document of the AoS World Congress held in November 2012 to “strengthen solidarity between AoS nations, sharing resources, best practices and developing expertise in the various sectors of the maritime industry, more particularly on fishing”. 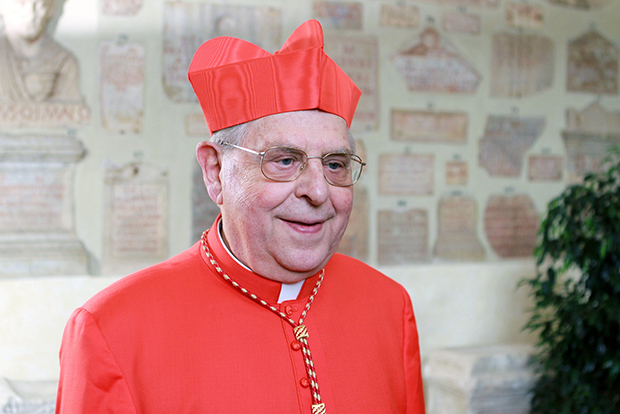 “As regional coordinators you will be asked to implement it by establishing contacts with AoS Bishop Promoters and National Directors in the nations of your regions,” said Cardinal Vegliò . “At the same time you will be also requested to think globally and create communion and unity by linking every AoS with this Pontifical Council.” “With patient dialogue you will have to create in the national and diocesan Churches awareness and attention towards this very specific ministry so that chaplains and resources will be allocated and the pastoral care of the people will be considered part of the ordinary pastoral solicitude of the Churches,” he added.
Cardinal Vegliò further drew attention to the plight of fishermen and their families, a community that has traditionally been an important part of AoS’ work, but who have also been subjected to abuse both in developing and developed countries.
“We cannot ignore the painful situation in which many fishers and their families are living. It is therefore really urgent to take more significant steps to develop old and new approaches to the pastoral care aimed at the world of fishers.  Special thought also goes to those seafarers still held hostage by pirates and their families,” he said.
Monsignor Giacomo Martino, Consultor of the Pontifical Council will speak about forced labour and trafficking in fishing. Also speaking at the conference is Father Bruno Ciceri of the Pontifical Council for the Pastoral Care of Migrants and Itinerant People and AoS Great Britain National Director Martin Foley, both of whom will discuss the position of AoS International as it stands and moving forward into the future.