Apostleship of the Sea (AoS) is responding to the Holy Father’s call to religious and priests to ‘wake up’ the world with their testimonies of faith.
During a meeting of AoS regional coordinators for East Africa, South Africa and Indian Ocean in Mauritius late last month, AoS Immingham port chaplain Fr Colum Kelly from Great Britain shared his experience as a priest and a port chaplain.
At the invitation of the Vatican’s Pontifical Council for the Pastoral Care of Migrants and Itinerant People, Fr Colum gave five presentations to encourage the participants and help them deepen their understanding of their chaplaincy.
“The Mauritius experience was a great opportunity to ‘wake up’ within chaplains and ship visitors their understanding of the sacred element in what they do,” said Fr Colum.
Last year Pope Francis announced that 2015 would be a year dedicated to the promotion of consecrated life, beginning this Advent. According to the National Office for Vocation, the Pontiff is “asking the church's religious sisters, brothers and priests to "wake up the world" with their testimony of faith, holiness and hope”.
Fr Colum said, “It was a chance to affirm the chaplains in their ministries and to reflect on the nature of chaplaincy, which is not just a group of good people doing good things but a commission derived from our baptism.”
“We examined our ministries in light of the Apostolic Exhortation of Pope Francis, in the context of evangelisation and our call as port chaplains to be joyful evangelisers. We studied and reflected on the Great Commission in the gospels of Matthew and John.” 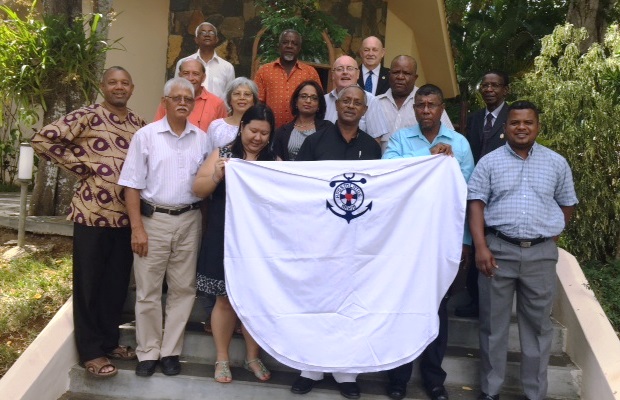 One port chaplain who attended the conference, AoS Madagascar National Director Felix Randriabnasoavina said Fr Colum’s sharing helped him deepen his faith and his commitment to AoS.
“It helped me feel more empowered and confident in my ministry, and I feel more renewed in my life of faith,” he added.
Another chaplain, AoS South Africa National Director Terry Whitfield said, “The conference was enriched with the presence of Fr Colum. His talks were both interesting and thought-provoking, and with his own practical experience it left us all with a new commitment.”
AoS Great Britain National Director Martin Foley said, “This is a great example of the international cooperation we agreed to undertake at the AoS World Congress in 2012. The sharing of our respective knowledge, experiences and strengths will benefit everyone associated with AoS and, by extension, further improve our service to seafarers.”
Fr Colum celebrated the 40th anniversary of his ordination to the priesthood this year. His ministry with seafarers was featured last year in a BBC Radio 4 Book of the Week titled Deepsea and Foreign Going: Inside Shipping, the Invisible Industry that Brings You 90% of Everything by author Rose George.
[snippet:aos-donate]