Apostleship of the Sea's efforts to improve the lives of seafarers have been widely recognised after they were named Holyrood Secondary's 'Link Charity' to their inaugural Fairtrade Fortnight.
Back in October, National Development Officer Euan McArthur attended a Charities Day in the Glasgow School which is the largest state secondary in Europe.
Pupils heard how AoS provided vital support to those earning their livelihood at sea often amid challenging working conditions and the South Side school, which is situated close to the charity's original beginnings on the banks of the River Clyde, have chosen to work in tandem with them throughout the duration of their Fortnight.
Social Sciences Teacher, Marianne Brady, is behind the specially-arranged fortnight and ensured pupils received a wide-range of learning by assigning them all to particular work stations throughout the morning of Monday, 27 February to ensure things got off to a positive start. 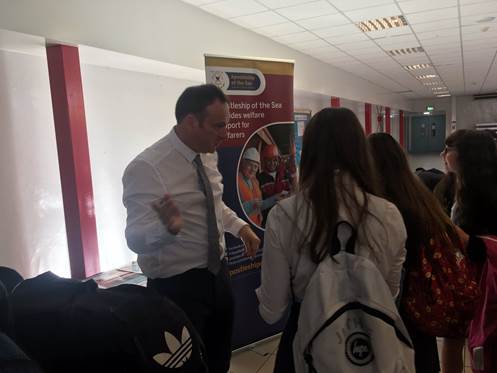 Mrs Brady said: "We're delighted to have Apostleship of the Sea back at Holyrood, this time as our Link Charity for Fairtrade Fortnight this year and into the future.
"Our pupils have really enjoyed finding out more about this charity's vital work and will continue to do so over the course of this fortnight. It really is a message which can touch everyone."
Euan said: "We offer a sincere thanks to Holyrood for nominating us in this way. We hope this can mark the start of a long and lasting relationship with this wonderful school.
"By working together, hopefully we can improve the lives of seafarers into the future."
[snippet:aos-donate]