AoS Congress opens at the Vatican

Cardinal Antonio Maria Vegliò, President of the Pontifical Council for the Pastoral Care of Migrants, officially opened the congress.

New Evangelization is to be at the heart of reflections at the XXIII World Congress  that began in the Vatican’s Synod Hall on Monday. The November 19-23 congress is the first to be held in Rome in 30 years; the last one to be held here was in 1982. This year’s Congress is also taking place 90 years after Pius XI signed the first Constitutions of the Apostleship of the Sea on August 17, 1922.
In his opening address to the some the 400 participants from 70 countries at the congress, Cardinal Antonio Maria Vegliò, President of the Pontifical Council for the Pastoral Care of Migrants, described Apostleship of the Sea centers with their chaplains and volunteers in ports around the globe as “a beacon of light for those who have sailed for weeks only in the company of themselves.”
In his opening speech, Cardinal Vegliò said: "After 30 years, we have chosen to be in the Vatican again because we wanted to return to our roots and commemorate the 90th anniversary of Pius XI's approval of the first Constitutions and blessing of this new Apostolate. The small mustard seed planted 92 years ago in Glasgow by a small group of laypersons has grown and fulfilled Pius XI's wish that this initiative would develop in the maritime areas of both hemispheres."

He also said the following prayer:
“O Stella Maris,light of every ocean and mistress of the deep,
guide the peoples of Oceania across all dark and stormy seas,that they may reach the haven of peace and light
prepared in him who calmed the sea.Keep all your children safe from harm
for the waves are high and we are far from home.As we set forth upon the oceans of the world,
and cross the deserts of our time,show us, O Mary, the fruit of your womb,
for without your Son we are lost.Pray that we will never fail on life's journey,
that in heart and mind, in word and deed,in days of turmoil and in days of calm,
we will always look to Christ and say,'Who is this that even wind and sea obey him?'”.

The Cardinal then declared the congress open. 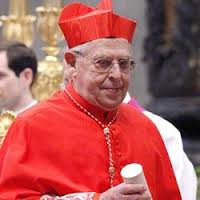