AoS has stepped in to support crew of a cargo ship currently detained at Tilbury in London. The distressed Filipino crew of the mv Isis have not been paid their wages over the last few months after the ship’s Greek owner fell into financial problems.
AoS port chaplain Deacon Paul Glock has been visiting the crew and providing them with practical and pastoral support, along with Deacon Joern Hille, the German Seamen’s chaplain. The vessel was first arrested in Port Arthur, Texas, USA in September, after its owner encountered financial difficulties and was unable to pay the crew.
Here the AoS and the Port Arthur International Seafarers' Center supported the crew and began advocacy to secure their unpaid wages. The mv Isis then sailed to the Caribbean, and on to the UK where the crew hoped to get paid and get off the ship. It was anchored off Southend from December 15 to January 2 before getting to Thames Refinery at Silvertown, London. 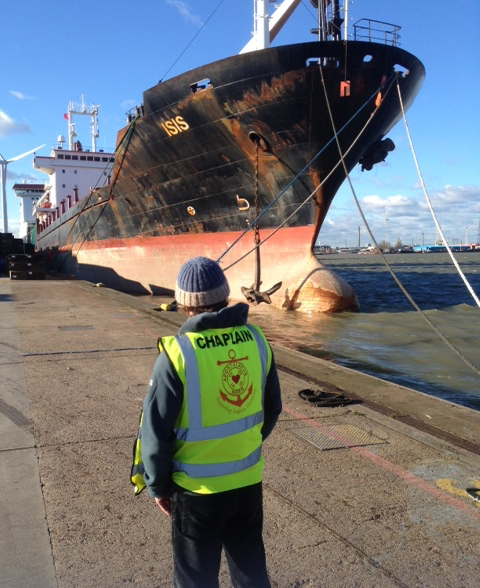 AoS stepped in to support the crew of the detained mv Isis
The Maritime and Coastguard Agency then detained the ship for deficiencies and the vessel was then moved to Tilbury for repairs. Meanwhile, the International Transport Workers Federation is helping the crew secure unpaid wages and the expectation is that the crew will be paid before leaving Tilbury. However, while waiting for a settlement, it is the seafarers and their families who have to bear the brunt of any fallout.
“One crew member has not been paid for four months, and as a result the electricity supply in his family home back in the Philippines has been disconnected,” says Deacon Glock. Last week Deacon Glock handed over Christmas presents to the crew when they visited the seafarers’ centre.
The Port of Tilbury, which has a strong tradition of supporting seafarers’ welfare, has given full support to the Apostleship of the Sea and other agencies in supporting the crew of the Isis.