AoS has provided some relief to the crew of a gas tanker that has been anchored off North Tees since early December. The Gammagas arrived at the Tees on 3 December last year but with no cargo to load, was ordered to drop anchor in Tees Bay. Unfortunately the ship's stay became extremely protracted and the crew subsequently spent Christmas on board.
AoS Tees and Hartlepool port chaplain Tony McAvoy said the crew had to improvise with whatever provisions they had. “Whilst all the time being in sight of land the crew were unable to come ashore, and we of course could not visit them.” The vessel docks regularly at the petro-chemical berths at North Tees, and AoS ship visitor Jimmy Ross is well known to the crewmembers for whom he provides vital support.
Ross kept in touch by phone, by text and by email and was able to provide the numbers for phone top ups so the crew could call home during the festive period. On 8 January, Ross was advised that the ship was to come alongside for a very short period, probably about four hours, to load fresh water and provisions. However this would not be at North Tees but up the coast at Port of Sunderland, about 30 miles away.
Contact was made with AoS ship visitor Sr Mary Scholastica and the AoS volunteer team at Sunderland and arrangements made for Ross to travel to Sunderland to complete his mission and deliver items to the crew. Sr Scholastica was on board within a short time after the ship berthed with woolly hats, socks and toiletries and later joined Ross and his wife Eileen to share in a joyous visit. The crewmembers were delighted with the belated Christmas presents.
The ship has since returned to Tees Bay and at the time of writing is still waiting to berth. According to PD Ports website the ship is estimated to move to North Tees ‘A’ Jetty on 6 February. 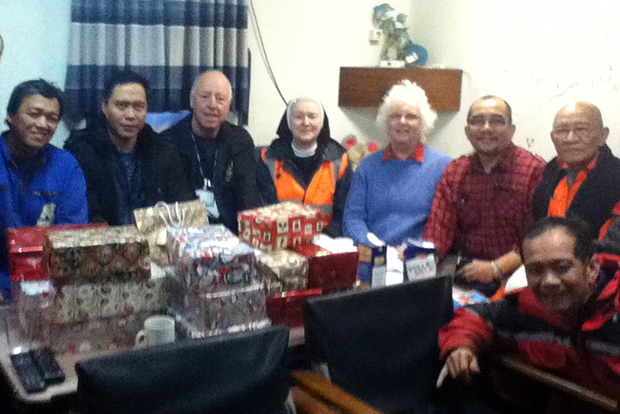 Sr Scholastica, Jimmy and Eileen Ross with Christmas presents for the crew of Gammagas.