Sr Marian Davey, Nun and port chaplain in East Anglian has recently had to provide rags to clean the engine on a ship because the crew had no money to buy them, as they had not been paid for nearly three months!
Sister Marian was asked by a Special Branch officer to visit a general cargo ship in Ipswich because he was concerned about the welfare of the crew following a routine visit. When she went on board, she was told by an angry crew that they hadn’t been paid for nearly three months.
Marian told us “The chief engineer said that he had no rags to clean the oil from the engine. So I went and bought some sheets in a charity shop. I also mentioned the problem to a port worker and he gave me two bags of compressed rags,”.
After eventually being paid, the crew then spent 37 days anchored two miles off Felixtowe waiting for new orders.
“The cook contacted me to say that they had very little fresh water, which meant they couldn’t shower, use the toilet, or wash their clothes.  They also had no cigarettes or TV. Being in these conditions on a small ship puts a crew under serious psychological stress,” she said.
When the ship returned to Ipswich she provided the crew with bread and fresh vegetables and also phone cards and top-ups so they could contact their families back home in Russia and Cape Verde.
Sister Marian explains that when a crew isn’t paid it also affects their families.  “One of the crew said to me, ‘My children can’t eat stones.’ Another member of the crew had medical bills to pay.  “The seafarers were treated completely unjustly throughout this episode and they were powerless to do anything.”

This is another example of why we ask for your help and your donations, so that we can use the money to support those seafarers who need care. 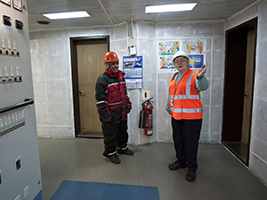