A fleet of ships owned by one company have been arrested in  several ports including Shoreham, Rye, Hull in the UK and Santander in Spain. Crews for these ships have been left confused and disillusioned about what fate awaits them, many having not had a wage for months.
The ships have been arrested since mid January , when AoS port chaplains became involved To support the crews.  On many of these ships the crew have not been paid wages for a lengthy amount of time, not only does this affect the seafarers themselves, but many of these workers send money home to support their families, so the impact is felt much wider.

AoS in the UK and in Spain have been helping the arrested ships, allowing seafarers to contact loved ones back home, helping to work with professional bodies to sort out outstanding issues, providing emotional support to the crew and where possible to provide other necessities. AoS Port Chaplain Roger Stone told us,  “Many seafarers of arrested vessels suffer loneliness. They’re far from home and cut off from their culture, family and friends. And it’s not just the crew that suffers. If wages aren’t being paid they can’t send money back to their families in their home country. Our work is about providing moral support and giving them the opportunity to do normal things whilst the shipping companies sort out their finances.”

Across the world AoS see situations like this with ever increasing regularity, latest statistics for 2011 showed that the number of ship arrests in the UK increased. The global economic hardships are affecting everyone and it can be assumed that situations such as arrested ships and unpaid wages will increase as everyone feels the pressure. This is why the work of AoS is so very unimportant and why we need your support more than ever. 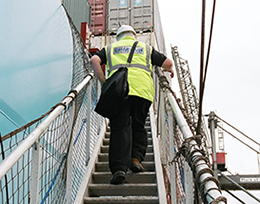