Sir Tom Farmer praised the work of Apostleship of the Sea (AoS) as they celebrated their inaugural Stella Maris Mass in St Mary’s Cathedral, Edinburgh.
The Edinburgh-born businessman and his wife, Lady Anne, joined supporters from surrounding parishes and beyond when they were led by Scottish Bishop promoter, Stephen Robson, in their first-ever Mass in the Capital to honour seafarers.
Fr John McInnes, from Our Lady of Lourdes and St Bernadette, Fr Kevin Dow from Ss John and Columba, Rosyth, Fr Jeremy Bath from Ss John Cantius and Nicholas, Broxburn and Cathedral Deacon, Peter Traynor, were among the clergy who turned out to con-celebrate Mass on the night of 28th September.
The remaining crew of the Malaviya Seven were given a guided tour of Edinburgh Castle earlier in the day and afterwards all present enjoyed some hospitality in Café Camino, thanks to the generosity of Deacon Traynor, to hear more about the work of the charity.
Sir Tom said, "It’s great to be part of this celebration. AoS has a strong Scottish connection and put in a lot time and effort in the nearby port of Leith. It’s a charity that deserves all the support it can get."
Bishop Robson said, "It’s always special to come back to Edinburgh where I was a priest some years ago. Having celebrated Masses in Aberdeen, Dundee and Glasgow, it’s now wonderful to take our message to the Capital City of Scotland where we have an obvious link to seafarers." 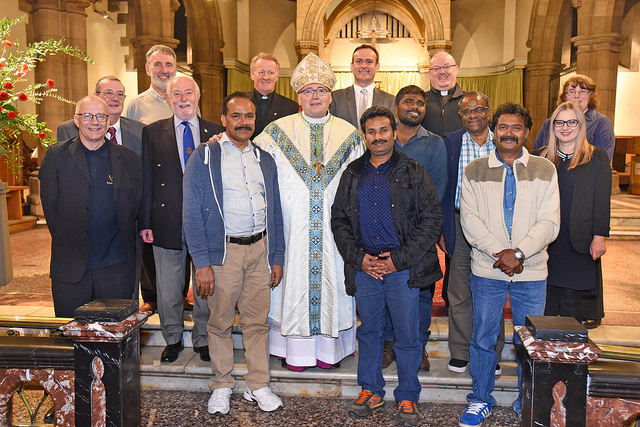 You can see more photos of the Mass by going to our Flickr site.