Three swimmer members of Leicester Saffron swim club generously took part in a charity one mile swim with four charities selected as recipients. AoS was one of the lucky charity. All three athletes have Downs Syndrome and the club itself is unusual as it's membership is exclusively for persons having learning difficulties.
Damien Brett, David Ludlow and Andrew Marriott (pictured L – R) took part in the swim and their coach Tony Willson helped them train and co-ordinate the event. All are members of Special Olympics and of course the Leicester Saffron Swimming Club. David has also twice represented the Downs Syndrome fraternity at National Level and as a junior won a silver medal in Reus, Spain.
We would like to take this opportunity to say thank you to the boys for all their hard work and effort, it is much appreciated. 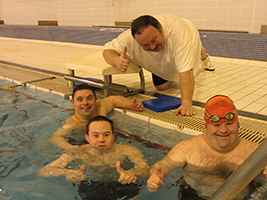