Life at Sea: it's none of my business - Stella Maris

Life at Sea: it’s none of my business

The challenges faced by seafarers whilst working on board ships has been highlighted in a short film by Harriet Grecian about the work of Apostleship of the Sea.
The video offers a candid view of life at sea and how AoS provides pastoral and practical support to seafarers in difficulties. While ship visiting, AoS Tyne port chaplain, Paul Atkinson speaks to crewmembers about their jobs, which often involves eight-hour days, seven days a week and up to a year at sea.
One of the seafarers describes how he had to continue working despite suffering seasickness in bad weather with waves of up to nine metres high. “The one thing that keeps us going is the thought of families back home and being able to contact them,” says another crewmember.
In another excerpt, Paul is seen speaking with four fishermen left stranded ashore in North Shields for months after the vessel they were contracted to work onboard was unable to go out to sea to fish. The men, from the Philippines, only received three months’ wages despite having 12-month contracts, and were not paid for the rest of their contractual period.
“Our families are starving because we’ve not received our salaries for a long time. We have a very, very big problem,” one of them tells Paul. A week after the interview the men were arrested and eventually deported because they were in the UK under a transit visa, which tied them to the specific vessel. As the ship was unable to go to sea, they were forced to spend time ashore, and thus deemed to be in violation of their visas.
You can watch the full video by visiting this link or go to our AoS on Film page.
AoS port chaplains and ship visiting visitors help seafarers with practical and pastoral support. Last year AoS supported more than 200,000 seafarers. We rely on donations in order to continue assisting seafarers. Please visit our Ways to Donate page to find out how you can help. 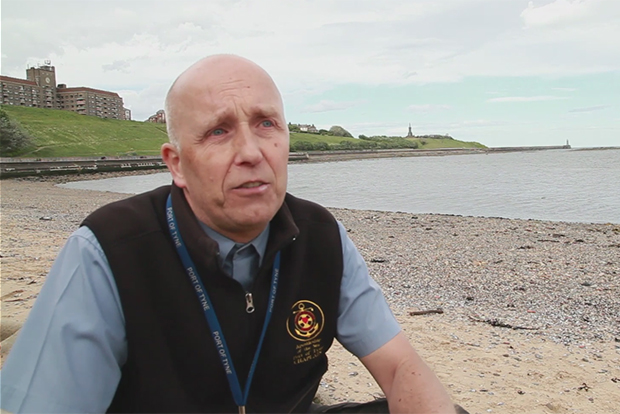 Paul Atkinson is featured in the film about AoS' work with seafarers.