Tony McAvoy, AoS chaplain in Teesport received a phone call from the Dutch Seafarers Centre in Rotterdam last Friday morning when he was advised that there had been a death on board the 'Nord Hercules' a bulk carrier headed for Teesport, and the crew wished to have Mass on board when they arrived in port. Tony called Canon Eddie Gubbins to put him on notice about the request for Mass.

When the vessel docked, Tony, together with AoS Ship Visitor Barry Doyle visited the ship and spent time with the crew who were obviously still in a state of shock. The body of Aristeo, the third engineer who had passed away had been removed from the ship in Rotterdam. Mass was arranged for Monday evening at 6.00pm. In the meantime Tony offered to take any crew members to Mass on Saturday evening, and on Sunday morning if they wished, in advance of the Mass on board. In the end five, including Captain Jose (whose first command this was) went to evening Mass, and he again came on Sunday morning with four other crew members.

Tony tell us. "The on board Mass on Monday evening was a wonderful occasion. Within the Mass, we all prayed for Aristeo and for the crew and their families. Canon Gubbins then blessed the Bridge, the Engine Room and various other parts of the ship. AoS gave prayer cards, rosaries, pictures and crucifixes plus copies of Bible Alive to the crew. Afterwards, over refreshments, we spent time with the Captain and crew chatting; all seemed delighted with what had been done, and were, I think, spiritually uplifted. We will continue to support the crew during the remaining few days before they leave Teesport to voyage to Thailand carrying 80,000 tonnes of steel (yes eighty thousand tonnes!)." 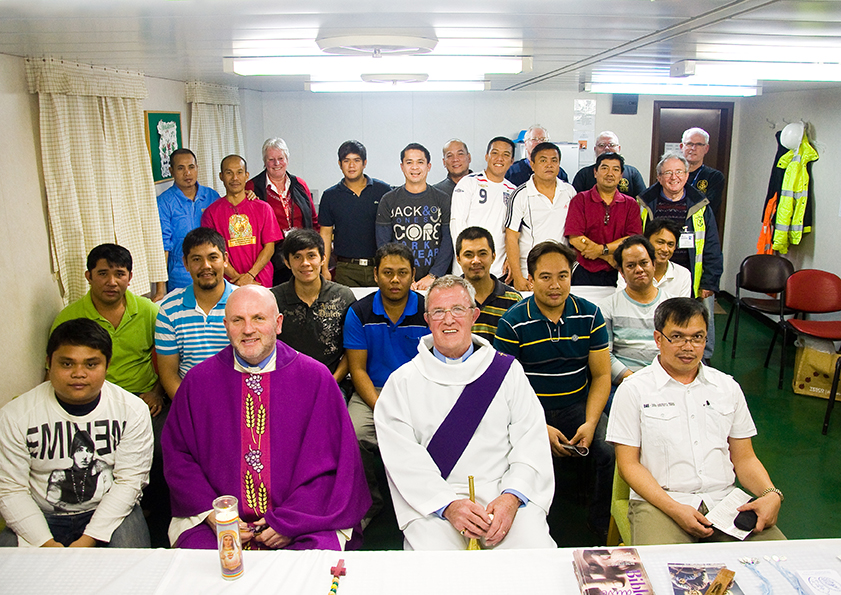