The ministry of Apostleship of the Sea (AoS) port chaplains is often a lifeline to seafarers who are away at sea for long periods of time.
AoS provides vital support and assistance to the many crew members who bring us our food, fuel and everyday goods, said Deacon David Cross in his homily at Mass in St Mary’s Cathedral on 11th September.
The Mass of Our Lady Star of the Sea was celebrated by Monsignor Gerard Robinson and attended by members of the clergy, AoS volunteers and supporters and local parishioners.
Deacon David said the support given by AoS was vital, especially if crew members are Catholic and unable to receive the Sacraments regularly. “They play an important role organising for priests to go on board and say Mass for the crew.”
Speaking from his experience of visiting a ship recently, Deacon David noted how local port chaplain Deacon Peter Barrigan, was able to get emergency medication for two seafarers suffering from gout at the eleventh hour. 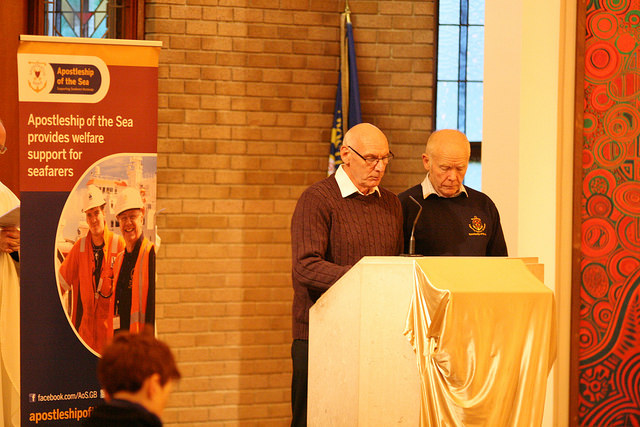 “This is just a little example of AoS’ work. Without that work of the port chaplains, without those links with the port authority and the local community, those two seafarers wouldn’t have got their medications,” Deacon David said.
He added, “The band of AoS ship visitors and volunteers who go and provide crew with rosaries, listen to them, take them practical stuff, they become icons of Christ. They become the love of God made visible.”
Deacon David reminded those at Mass that seafarers have paid the price for bringing us the goods we consume. “Often the work of AoS makes a difference. Their ship visits offer seafarers someone they can meet, who cares, who doesn’t pretend to have all the answers but who provides a listening ear and a link that is so helpful.
“Seafarers need that support network.  AoS acts in the name of the Catholic community, exercising the Church’s ministry, being the face of the Catholic community to those crews. That’s so important. We should say thank you to the AoS.”

*More photos can be found on our Flickr site here.