Mass of Our Lady Star of the Sea was celebrated at St. Mary’s Cathedral, Newcastle on September 22.
Organised by Apostleship of the Sea (AoS), Mass was celebrated by Monsignor Ronnie Brown, a former Royal Navy chaplain and AoS trustee. Mass was attended by members of the clergy, AoS volunteers and supporters and local parishioners.
Deacon David Cross who preached the homily said AoS’ ministry is often a lifeline to seafarers who are away at sea for long periods of time.
“AoS provides vital support and assistance to the many crew members who bring us our food, fuel and everyday goods, and the support given by AoS is vital, especially if crew members are Catholic and unable to receive the Sacraments regularly.
“They play an important role organising for priests to go on board and say Mass for the crew,” he said.
He added, “The band of AoS ship visitors and volunteers who go and provide crew with rosaries, listen to them, take them practical stuff, they become icons of Christ. They become the love of God made visible.” 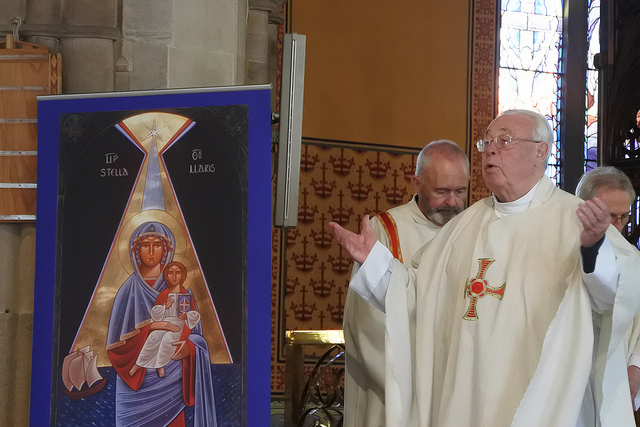 Deacon David reminded those at Mass that seafarers have paid the price for bringing us the goods we consume. “Often the work of AoS makes a difference. Their ship visits offer seafarers someone they can meet, who cares, who doesn’t pretend to have all the answers but who provides a listening ear and a link that is so helpful.
“Seafarers need that support network. AoS acts in the name of the Catholic community, exercising the Church’s ministry, being the face of the Catholic community to those crews. That’s so important. We should say thank you to the AoS,” he added.
In Hexham & Newcastle Diocese, AoS port chaplains and ship visitors support seafarers arriving at the ports of Blyth, Tyne and Sunderland among others.
Martin Foley, AoS National Director, said, “I would like to thank Monsignor Ronnie for leading our celebration of Mass and the diocese of Hexham & Newcastle for their ongoing support for our work.”

*More photos of the Mass can be seen by following this link.