Scottish schools do their bit

Apostleship of the Sea (AoS) were welcomed back to St Mary’s Primary School, Greenock, who showed their enthusiasm by embarking on some more fundraising efforts for the charity.
Pupils at the Inverclyde school have been learning within their Development Groups how particular organisations help those within the local community, having first invited AoS to be part of their initiative over a year ago.
Earlier in the day, the pupils had attended Mass in St Mary’s church along with teacher Mr Grant McDonald and were joined by passengers from a cruise ship which was berthed in the town that day.
Thanks to a post-Easter raffle, AoS received a cheque for £125 which AoS Scotland Development Officer, Euan McArthur, collected on the day.
Mr McDonald said, “We want to help Apostleship of the Sea as much as we can. The pupils have been busy finding out as much as they can about the charity and we’ll learn even more with a School Assembly after the summer holidays.
"When they saw the big cruise ship here it made them think of the sea, and particularly for the crew who work so hard.”
Euan said, “We would like to thank St Mary’s for their generosity and look forward to going back in the new academic year.”

Separately, we have also benefitted from the generosity of St Ninian’s High School, Giffnock. Euan collected a cheque for £300 from the East Renfrewhsire school recently.
As the school strengthens its relationship with AoS, Euan was presented with the donation from pupils. They have been keenly engaging with the charity since the start of the current academic year.
Pupils from various year groups have been addressed over the past few months and further plans to fundraise are already underway.
Head of RE, Gerry Bradshaw, said, “It’s great to have AoS here in St Ninnian’s. We fully realise the important of this charity which was founded in Glasgow.
“It’s wonderful to know AoS' World Congress is coming here in 2020.”
Euan said, “We would like to take this opportunity to record our thanks. St Ninian’s High School have been so generous and we very much appreciate their support.” 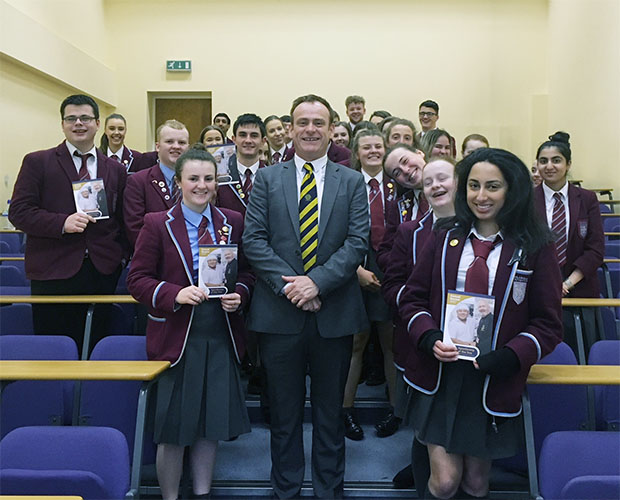