When the large general cargo ship m/v Federal Saguenay berthed in Tees Dock, Apostleship of the Sea Ship Visitor John Wordsworth was one of the first to go aboard. Having made contact with the Captain and crewmembers, John was able to offer local information arrange transport to the seafarers centre and also to town.
The twenty one crewmembers were all from India, and as usual, they were of mixed faith. The Captain, and four other officers and crew were Catholic and expressed a strong desire to attend Mass while they were in port. This is ususally quite straightforward to arrange but operational issues and working patterns intervened on this occasion. However, they were very pleased to learn that on the following Monday evening 24th September there was to be the Golden Jubilee Mass at St Bernadette's in Nunthorpe to which they were very happy to accept an invitation to attend.
The Mass was a wonderful occasion with Bishop Terence Drainey as Principle Celebrant, parish priest Mgr David Hogan, Canon Gerard Robinson and a number of other diocesan priests in attendance, in which the seafarers were delighted to share. After Mass, at the Buffet reception parishioners took time to converse with the group and make them welcome, and they also chatted with Mgr Hogan and Bishop Terence and were photographed with each of them.
The Federal Saguenay was in port longer than usual loading 15,906 tonnes of steel to be exported to four ports in the USA, so on Saturday 29th September the same five seafarers were able to attend the vigil Mass at St Andrew's parish in Teesville. Here they were again made very welcome by Canon Eddie Gubbins and parishioners and an account of their visit together with a photograph of the men with Canon Gubbins and Sister Maria Varley appeared on the parish website  within a couple of hours of the Mass. Here is Mgr David Hogan with the seafarers. 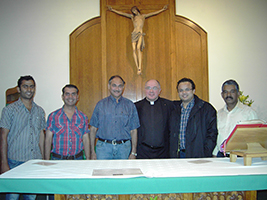