Star of the sea - Stella Maris

Star of the sea

Here's an article about our Scotland Bishop Promoter, Stephen Robson, which appeared in the Scottish Catholic Observer on 6 July 2018. Words by Euan McArthur.

Stephen Robson loved listening to stories of how Apostleship of the Sea helped seafarers. Now, as the charity's Bishop Promoter for Scotland, he finds himself moved every time he witnesses first-hand their mission being carried out.
Robson was often regaled by anecdotes from his predecessor, Bishop Peter Moran, whom he replaced in February 2015 and since then he's embraced uncharted waters to the extent he's brimming with passion to improve the plight of many who venture out to sea to earn a living.
It didn't take long for the Bishop of Dunkeld to grasp just how vital a role he'd assumed in endeavouring to assist those arriving on these shores, something he's experienced in his own Diocese when foreign sailors are taken to Mass in St Andrew's Cathedral, Dundee by volunteer ship-visitors.
As parishes prepare to celebrate Sea Sunday around the country today and acknowledge the reliance of everyday goods which arrive by sea but can sometimes be taken for granted, Robson feels privileged to be a leading advocate for AoS here in Scotland, where it all started almost 100 years ago. 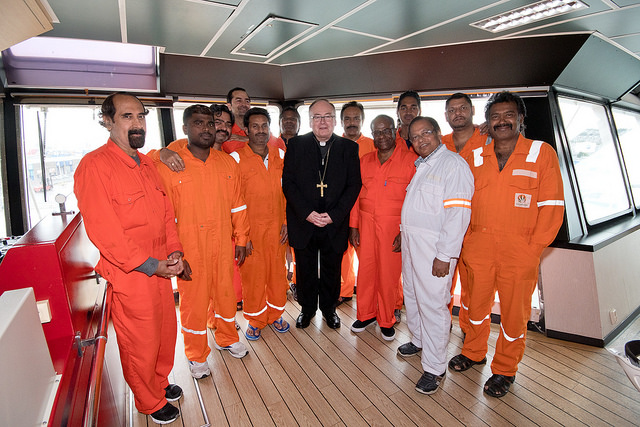 He recalled: "Our previous promoter, Bishop Peter Moran, is a very good friend of mine. He used to speak so warmly and happily about Apostleship of the Sea.
"To be honest, I didn't really know all that much about AoS before being appointed Bishop Promoter for Scotland, other than the fact it was founded in Glasgow and the kind of general work it done, but soon began to realise how important a mission it is.
"You just have to look at the number of seafarers who're Catholic and come to this country from places like India and the Philippines, and a lot of these men leave their families back home to come away and work for a long period of time.
"Not everyone is impervious to feelings of loneliness. Some of the guys are struggling a bit. We've got ship visitors who bring them to Mass and it's just nice to meet them and have a chat.
"It struck me as incredibly important how much work is done to help these people keep in contact with their families, especially when they are experiencing difficulties in communications.
"There is somebody there to try and defend them when things go wrong.
"We only need to look as far as the crew of Indian lads from the Malaviya Seven who were left stranded in Aberdeen not so long after their ship owners went bust and gave up on them.
"It strikes me that there's a lot of abuse among some vulnerable seafarers in a foreign land when it comes to issues of pay, justice and sickness.
"Apostleship of the Sea is so good about that, assisting them practically and spiritually.
"What happens if a seafarer's wife dies or one of their children takes ill? They need emotional support from AoS Chaplains."

Robson is an ideal fit for AoS. Having spent some of his early Priesthood years in Our Lady of the Waves Church in Dunbar, he's had a natural affinity with the sea from as far back as he can remember.
The entire family, in fact, were steeped in a rich seafaring tradition which inevitably brought its own dangers and challenges.
He explained: "My Dad had a part-share in a fishing boat when I was a child.
"As a kid. we used to go to Dunbar and when I became a Priest, that's where I spent a lot of my time.
"I was a wee bit nervous of the Sea when I was a wee boy but Dad had a great love for the Sea as he'd been in the Royal Navy himself and in the War in the Far East.
"My great uncle – my grandfather's brother – was a seafarer all his life. He started off as a Cabin boy on Fyffes banana lines.
"He was 105 when he died. He worked himself up and became the commodore of the fleet.
"The interesting thing was when we were growing up, he used to tell us stories about the war when he was in charge of the Atlantic Convoys when they were bringing food and provisions from the United States to our country.
"He wrote a book which my Mother has a copy of at home and it reminds us how dangerous that whole mission was.
"They were often traced by U-Boats and picked off by aeroplanes. They were constantly in difficulty, quite frightening really."

When the opportunity arises, Robson enjoys going on a cruise and is well aware of the growing presence of AoS from his travels across the world.
From its humble origins back in 1920 when it was founded on the banks of the River Clyde in Glasgow, the Catholic charity now has a presence in over 300 ports worldwide and that's a fact which fills him with much satisfaction, although he's been forced to endure some frustration as well.
"One of the thing which impresses me is the fact it's an international organisation and one that's growing," said Robson.
"Actually, last year I was in Taiwan, Japan and Korea. The first thing I saw when I stepped off the ship in Korea was Apostleship of the Sea.
"Korea has quite a large Catholic population and I saw it as well in Nagasaki in Japan. It's genuinely very impressive to see AoS so widespread in its work.
"I just love being by the Sea and have been on cruises for the last eight years.
"We used to go with one particular cruise-line which I won't mention. There were six Priests and we always liked to provide a Sunday Mass for the people on board because very few cruise-lines have resident chaplains for Sunday's.
"We used to say a Mass for the crew at about 11pm, Midnight or even 1am as that was the only time they were able to attend, particularly the Indians and the Filipinos who worked such long hours and were desperate to go.
"But they stopped that as well and really we've had increasing difficulty over the years to say Mass.
"The first thing I actually noticed was the stuff we used like the chasuble for the Mass was supplied by Apostleship of the Sea. But they weren't allowing us to say Mass onboard the ship which I found quite sad.
"At one time they must have allowed it, because the vestment from AoS is quite distinctive. You couldn't help but notice it."

Closer to home, the World Congress is coming to Glasgow in 2020 to mark AoS' centenary, providing the opportunity to celebrate its past while looking to the future.
During the month of September, Scotland hosts four Stella Maris Masses and their Bishop Promoter led their celebrations for the inaugural Mass in St Mary's Cathedral, Edinburgh last year.
Robson said: "We've starting expanding the annual celebrations to raise the profile.
"We have our Stella Maris Masses in all the big cities in Scotland once a year to highlight the importance of the mission. After all, we have big Ports here in Aberdeen and Grangemouth where there's a lot of oil commerce and merchant shipping.
"It's very important now that we have Masses in Glasgow, Aberdeen, Dundee and Edinburgh and we've also expanded our mission into Argyll and the Isles.
"We're hoping our centenary celebrations in 2020 will broaden things even further, and we're looking for support from our parishes.
"The Sea Sunday collection isn't always taken up but hopefully that changes. It would be great if everyone in Scotland was not only aware of the mission, but the fact it was started here. It's something which has been exported which we should be proud of.
"What we want is for everyone to celebrate that with as much verve and enthusiasm as possible."

* More on this story can be found at http://www.sconews.co.uk/feature/55879/the-stars-of-the-seas/