Archbishop Rino Fisichella, President of the Pontifical Council for Promoting New Evangelisation in the Vatican, made a pastoral visit to the ship’s company on board P&O ship Ventura when it docked at Civitavecchia, Rome on Friday, September 8th.
The captain and senior officers welcomed the Archbishop to the ship, who then went on a tour of the ship including crew areas, and met a large number of the 1,200 crew on board.
He also joined the crew for lunch in the crew mess and drew the tickets for the crew raffle. Later Archbishop Fisichella celebrated Mass for the crew in the ship’s theatre.
September 8th is the feast of the Nativity of the Blessed Virgin Mary. Accompanying Archbishop Fisichella were Fr Francesco Spinelli from the Pontifical Council and Fr Bruno Ciceri, International Co-ordinator of Apostleship of the Sea (AoS) in the Vatican.
Also present was Reverend Roger Stone, AoS port chaplain in Southampton. In his homily Archbishop Fisichella observed that although many different languages were spoken by the crew on board, the language common to all was the faith they share. 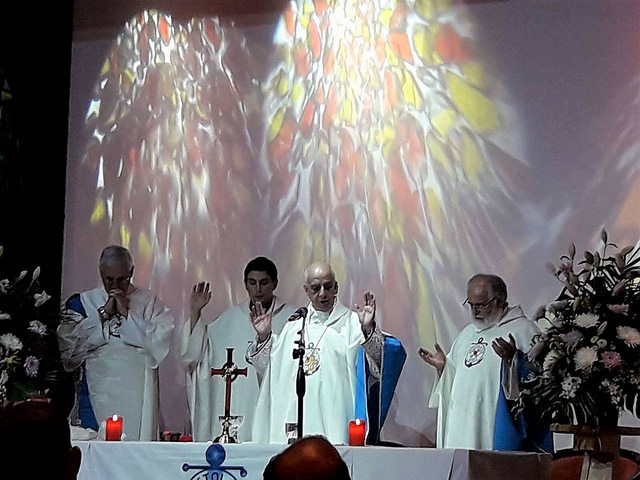 “Wherever you might be in the world, the faith is the same, the Eucharist is the same, the word of the Lord is the same,” he said.
The Archbishop reminded the crew that just as the Holy Spirit chose Bethlehem to be the place where the Saviour would be born, so today the Spirit works through those who are the least significant, the least obvious.
Reflecting on the reading from Saint Paul's letter to the Romans, he encouraged the crew with the truth that God has a purpose for everyone, even though we do not know what it might be until the end of each day.
The Archbishop’s visit was organised by AoS, the Catholic Church’s maritime agency which supports seafarers’ spiritual, pastoral and practical needs.
* For more information about AoS’ dedicated cruise chaplaincy visit www.apostleshipofthesea.org.uk/cruise-chaplaincy 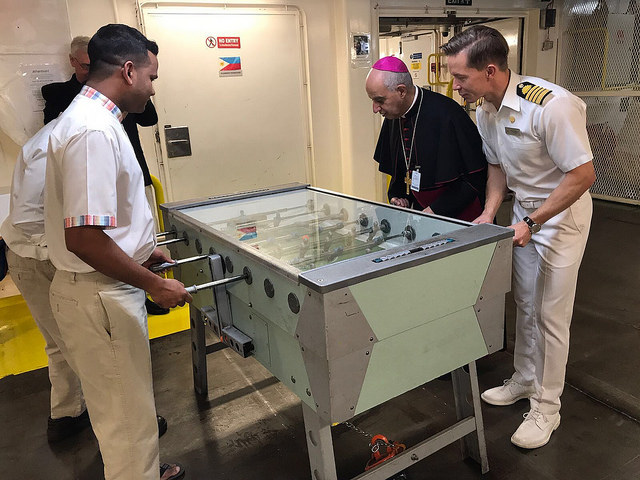